We pride ourselves on being able to bring you cheap van deals on the best new vans, so we’re constantly refreshing our stock with the latest models from a wide range of manufacturers. As part of that commitment, from September onwards, we’ll be updating our stock with a range of brand new 71-plate vans, all available at amazing prices. On average, we save our customers up to 40% off the Recommended Retail Price of each vehicle here at Van Discount, often equivalent to thousands of pounds!

The anatomy of a number plate – the place of origin

Non-personalised number plates (i.e. the majority of them) only consist of seven digits, but that short string of characters can tell you quite a lot about the car.

The last three digits are randomly generated, and allocated to the dealers when the car is registered. It’s the first four that are the most important.

The first two digits indicate the location in which the car was registered. Various cities and regions throughout the UK have their own codes. For example, MA through to MY spans from Manchester to Merseyside, whereas KT indicates Kingston, in Surrey. London is such a large city that it takes up several 2-digit area codes, from LA through to LY. 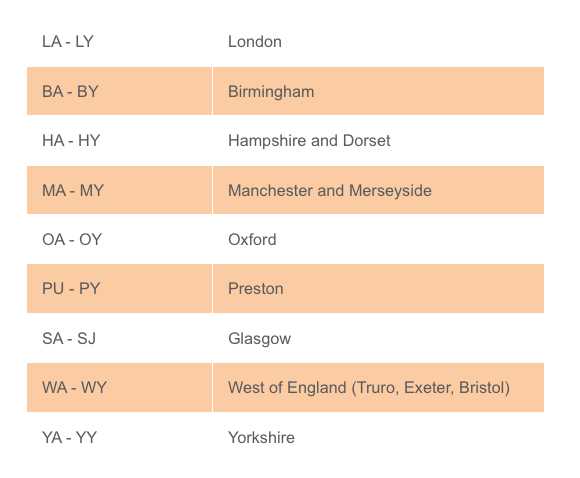 The anatomy of a number plate – the age identifier

The third and fourth digits are the age identifier, which indicate the year in which the vehicle was manufactured.

New number plates are released twice each year, in six-monthly intervals – in March, then September. March reg plates feature the age identifier in the standard format as the last two digits of the year: so a van made in 2002 will have 02 as its age identifier, while the most recent vans this year will have 21 as their age identifiers, indicating that they were made from March 2021 onwards.

Here’s how that pattern will progress in the coming years: 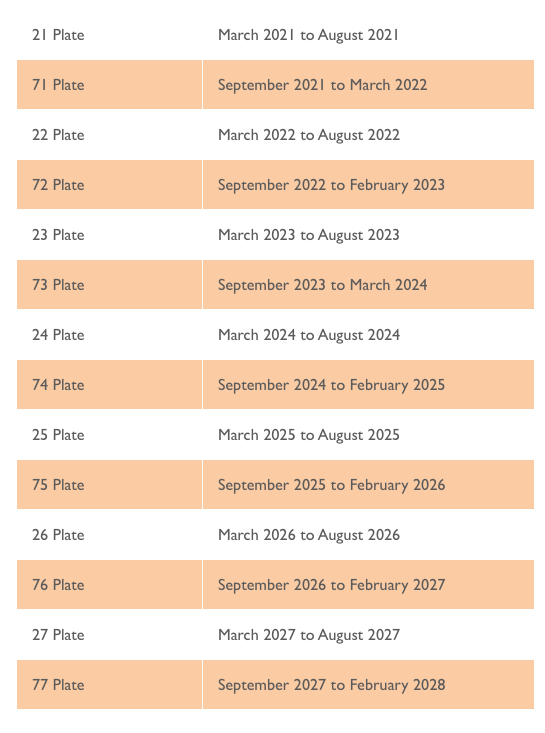 Now, you’ll probably have already noticed that this pattern can’t repeat indefinitely. The end date for the current system is February 2021, after which point the DVLA is likely to bring in a brand new methodology for number plates. That’s quite some time off yet, though!

Why do number plates matter?

That’s a very simple question with a (thankfully) simple answer. Number plates are able to give you key information about the vehicle in little more than a glance. If you know what you’re looking for, you can tell where the van was made, how old it is, and that gives you a baseline indication how efficient and high-tech you can expect it to be, and how much it’s worth.

That makes 71 plate vans the most highly sought-after new vehicles for fleet managers across a huge range of industries in 2021 – and best of all, you can make huge savings when you buy from us right here at Van Discount.

Drawing on our decades of expertise and network of personal contacts here at Van Discount, we actually save our customers an average of 40% off the recommended retail price of a new van – often translating to thousands of pounds. So whether you’re looking at the best electric vans, or you’d prefer a traditional petrol or diesel vehicle to suit your needs, rest assured that we’ve got exactly what you’re looking for here at Van Discount. Give us a call on 01282 872 530, or take a look around our site, and see what you can find?